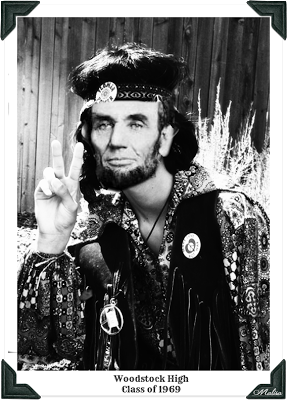 Believe it or not...you probably won't believe it...the day I met Abraham Lincoln was at Woodstock in 1969. We were both seniors and were both trying to change the world.

We met quite by accident. We were both standing in line waiting to use the port-o-potties. He was quite tall and I was standing behind him in the long shadows he cast upon the ground. I was grateful for the shade he provided as I had been out in the sun for several days. He finally noticed me cowering behind him. I had to look up high to meet his gaze.

"How's the weather up there?"

"Hey, Blondie. Do you know how tired I get of hearing that question?"

"Do you know how tired I get of being called Blondie?"

"Chill out. What do you want me to call you?"

"But I thought you didn't like to be called Blondie."

"Dude, do you actually think I'm gonna tell you my real name?"

"Right on, Blondie. You are one righteous chick."

"Seriously? Clyde? You want me to call you Clyde? Tell me the truth. What's your name?"

"Oh, alright. My name is Abraham, but you can call me Abe."

"Thanks for being honest, Abe."

"Want to hang out for awhile?"

That's how it all started. That was the beginning of a simple friendship. Okay, I'll come clean. It was more than a simple friendship. We spent several hours rolling around in the mud and dancing naked in the rain. I really don't remember that much of it, but there are pictures of us floating around out there on the internet. You probably didn't recognize us because we were covered in mud, but that was us...me and my buddy, Abe.

Love, peace and happiness wasn't as easy as it should have been because of this chick that was always hanging around Abe. She was a short, chubby little thing and she was a real mouthy broad. She had this heavy Southern accent like she was from Kentucky or somewhere. All I know about her is that her name was Mary. I also know that Abe sure didn't want Mary to catch us gettin' our groove on.

I sadly remember the last time I saw Abe at Woodstock. We were watching Country Joe on stage. He was belting out a war protest song. Abe and I were exchanging political beliefs.

I looked deep into Abe's eyes and said "All the world over, so easy to see. People everywhere just want to be free."

Abe nodded in agreement. "Listen, please listen, that's the way it should be. Deep in the valley, people got to be free."

I was amazed that Abe and I were thinking so much alike. "Shout it from the mountain on out to the sea. No two ways about it, people have to be free."

There were tears in Abe's eyes. "Ask me my opinion, my opinion will be, natural situation for a man to be free."

I was mesmerized by Abe at that moment. Everything around us had stopped moving. We were frozen in time. I was either in love or I was having a bad reaction to that  damned brown acid.

Evidently it was the acid because Abe seemed to be hallucinating. He was pointing and shouting, "See that train over there? That's the train of freedom! It's about to arrive any minute now. You know it's been a long long overdue. Look out cause it's coming right on through!"

There couldn't have been a worse time for the chubby girlfriend to show up, but evidently she did because someone started yelling "Mary Jane, Mary Jane!" and pure pandemonium broke out all around me. When the crowd parted,  Abe was gone.

I sat by myself for thirty seconds before a cute, shirtless boy wearing a loin cloth sat down beside me.

"Hey, blondie. You like Richie Havens? He's far out, huh?" he asked as he pointed at the singer on the stage.

"Richie's cool, man. My friend, Abraham Lincoln, would have really liked this song."

Loin cloth boy laughed and put his arm around me, "Whoa! You tripping, girl?"

Email ThisBlogThis!Share to TwitterShare to FacebookShare to Pinterest
Labels: Cooter wouldn't approve of this at all, Day 12 of 30-2 Days of Writing, lyrics to People Got to be Free by The Rascals, Nicky and Mike, Richie Haven's Freedom, We Work for Cheese, Woodstock