God Help Us All 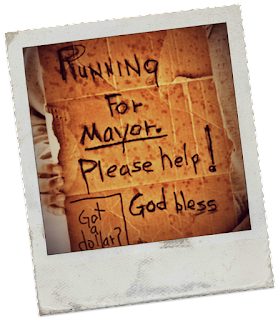 I'll never forget the day that Cooter decided he wanted to be the mayor.

He made his announcement at The Rack 'n Roll Pool Hall. It was almost closing time and Cooter announced that the last round of beer was on him. I knew something bad was going to happen when he said that. Cooter is not a generous man. After he announced that he was going to run for mayor, I went into hysterical laughter until I realized I was the only one laughing. Everyone else in the room had their beers held high and were chanting Cooter's name. That was a sobering moment for me.

So Cooter's political career began in the back room of a smoky pool hall as had many Texas politicians before him.  Ethyl Johnson saw me sitting in shock at the bar so she pulled up a stool beside me. "Well, I can see that you are elated about being first lady of this burg. Might as well make sure that you don't get embarrassed anymore than you are  right now. If Cooter is gonna run for mayor, we need to make sure he is gonna win." After she delivered those words of wisdom, Ethyl bought me another beer and became Cooter's official campaign manager.

The next day, Ethyl had taken over The Rack 'n Roll Pool Hall and turned it into Cooter's campaign headquarters.  Ethyl had sweet talked the local grocer into donating a big roll of butcher paper for signs.  On the first day of the campaign, a dozen people showed up with Magic Markers in hand ready for sign making.  Ethyl divided up the volunteers and assigned groups to the town's two voting precincts. She hung a map on the wall with large red X's marked on the locations where she wanted the signs hung. Ethyl motivated the volunteers with a rousing speech and turned them loose on the town.

The phone in The Rack 'n Roll Pool Hall began ringing about an hour later and didn't quit ringing all day. Ethyl Johnson was hit with a barrage of complaints from the townspeople.

Dr. Marvin Miracle at the Washed in the Blood of the Lamb Church was offended by the sign which had been taped to one of the converted gas pump/crosses in front of his church. "Ethyl Johnson, do you believe that this slogan is appropriate?"

LOOKING FOR A SUITOR?
VOTE FOR COOTER!

Ethyl had to agree that it wasn't.

Then there was the grocer who had donated the paper for the very sign he was calling  to complain about. He demanded that the sign be taken down immediately.

MAYOR MOORE IS OLD
AND SOON WILL BE COLD,
SO VOTE FOR COOTER
CAUSE HE IS MUCH YOUNGER AND SO MUCH CUTER!

Ethyl drove over to the grocery store and took the sign down herself.

By the time Ethyl got back to the pool hall, the sheriff was on the phone. He was calling to tell Ethyl that he had shot one of her signs off the fence next to the city hall. Ethyl was afraid to ask what the sign said, but she bit the bullet and went for it.

TIRED OF LOOTERS
AND MOTOR SCOOTERS?
VOTE FOR COOTER
CAUSE HE'S A SQUARE SHOOTER!

It was at that very moment that Ethyl Johnson resorted to a new plan that would change the campaign and change my life. She moved the Cooter for Mayor Campaign Headquarters from The Rack 'n Roll Pool Hall to the women's prayer circle meeting room at the First Baptist Church.

For those of you laughing at me for not writing a post yesterday, I did. So there. Maybe I posted it late. Maybe I did. Want to make something of it? Have you read it? That's what I thought. For those of you who are just tuning in and don't know what is going on, I am kind of participating in Nicky and Mike's 30-2 Days of Writing over at We Work For Cheese. Go HERE to read the other participants' witty posts for today. Want to join in? C'mon in...the cheese is fine!

Email ThisBlogThis!Share to TwitterShare to FacebookShare to Pinterest
Labels: Cheesy Mike is Cooter's campaign treasurer, Cooter for Mayor, Day 10 of 30-2 Days of Writing, Nicky and Mike, We Work for Cheese