He Stopped Loving Her Today 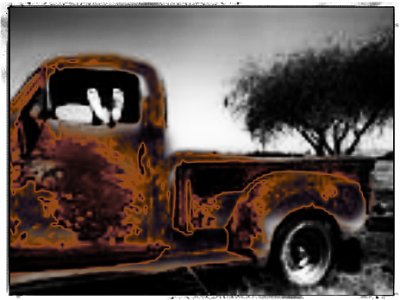 Bobby Lee was too scared to pick me up at my single-wide.

It was another hotter than hell Texas evening. The doves were beginning to roost in the thorny mesquite trees which surrounded the trailer park. The gentle cooing of the doves should have been comforting, but the noise just pissed me off. The doves were unusually plump this season and I knew that their cooing and wooing  would attract Bobby Lee's attention. If I wasn't careful, Bobby Lee would be daydreaming about shooting their bulging breasts instead of paying attention to mine.

Bobby Lee and I had been planning this reunion for years. It had to happen. It was the only way to get Bobby Lee off my back. I had heard him bitch for years about me being the only girl that didn't succumb to his charms back in high school. I was tired of being the subject of his long-winded, drunken stories. Every time I walked into the Piggly Wiggly, people would point at me and whisper about the cold-hearted woman who broke Bobby Lee's heart. It had to end.

We had to be careful that no one saw us. As soon as it got dark, I walked down the dusty dirt road that led out of the trailer park. Everyone would just assume that I was going down to the snow cone stand. But I wasn't. I was going to hell.

Bobby Lee picked me up behind the Little League ball field. I couldn't help but notice that he was driving the rusty ass pick up truck that he drove in high school. Some things never change. He was craning his neck and looking all around. He was as nervous as a whore in church.  "Are you sure Cooter isn't following you?" he whispered.

"Bobby Lee, you know damn well that Cooter is roping over at the rodeo grounds. What about Barbara Sue? How did you get away?"

"Hell, she's gettin' a permanent over at the Cut 'n Curl. She'll be there for hours."

There was no excuse. Now was as good a time as ever. I got in the pick up truck and Bobby Lee drove toward our destination. I slid down in the seat so that the tongues in town wouldn't be wagging. It didn't take long to get to Wildcat Stadium. Bobby Lee got out and popped the lock on the gate. Before I knew it, we were parked on the 50 yard line right in the smack dab middle of the field. Right where we had been twenty years ago when I told Bobby Lee no and broke his heart.

Bobby Lee scooted across the seat and pinned me in the corner. George Jones was singing "He Stopped Loving Her Today" on the radio. The time was perfect. Bobby Lee put his lips up to my ear. I was ready for him to romance me.

"This time, you better put out."

I didn't know I was so strong. Bobby Lee was out that window and landed flat on his back right on the 50 yard line. My cell phone was in my hand and I was snapping photos as I was kicking a man down on his luck.

The last time I saw Bobby Lee was in the rear view mirror. He was trying to jump in the back of the pick up truck as I drove  out of Wildcat Stadium and toward the Cut 'n Curl.

I don't usually tell tales out of school, but I'm doing just that for Nicky and Mike's 30-2 Days of Writing at We Work for Cheese. Go HERE and catch up with the other participant's stories. Join in. You know you have a story you want to tell.

Sorry that I missed out on yesterday's topic. Guess I am doing 30-3 Days of Writing.

Email ThisBlogThis!Share to TwitterShare to FacebookShare to Pinterest
Labels: Bobby Lee, Cooter and the gang, Day 5 of 30-2 Days of Writing, Nicky and Mike, Texas tales, We Work for Cheese