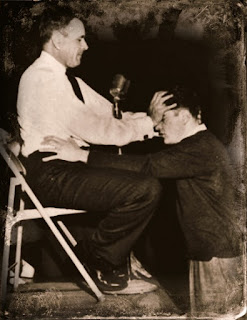 I knew I had to repent.

I needed to talk to Jesus, but I didn't want to talk to him at the First Baptist Church. The women's prayer circle kept a full time monitor outside the preacher's office door so they could put your name on the prayer list before you even had a chance to say a prayer for yourself first. The sight of me going in to visit with Preacher Bob could set off the automatic phone call system to summon the prayer circle together for an emergency prayer meeting. No, I needed to repent in a church whose members weren't also in the Tuesday Morning Bridge Club.

The Washed in the Blood of the Lamb Church was located on the outskirts of town in an old convenience store. The gas pumps outside the church had been converted into colorful crosses which flashed lights and changed colors in rhythm to the tune, "The Old Rugged Cross."  As I entered the church I noticed that  what had once been the beer coolers were now stocked with row after row of chilled bottled water aptly named Holier Than Thou Spring Water. The area of the store which once featured nuts, chips and motor oil was now filled with folding chairs set up for the congregation. I counted seven chairs and breathed a big sigh of relief at the thought of repenting before such a small group.

I had just sat down in my gently used folding chair when the lights dimmed and the music started. Dr. Marvin Miracle entered the room from what used to be the adult magazine section of the store. His voice startled  me as he belted out "The only one who could ever reach me..." and the handful of parishioners answered in song with " was the son of a preacher man." Back and forth they went.

"The only boy who could ever teach me..."

"Was the son of a preacher man."

I knew I was in the right place. Any church who liked Dusty Springfield was bound to like me. I jumped to my feet and joined right in.

As Dr. Marvin Miracle walked by me, he took my hand and led me to the front of the church. I could feel the healing power surge through his hand to mine. The congregation fell silent as Dr. Miracle spoke to me.

"Why did God bring you  here tonight?"

"The only one who could ever reach me," he began singing again.

"Was the son of a preacher man," the rabid followers chimed in.

Dr. Marvin Miracle took me by the shoulders and dramatically turned me to face him. "Do you need to repent?" he shouted.

"Do you want to go to Haven?" he yelled enthusiastically.

"Where?" I asked meekly.

I looked around the room at all the arms outstretched to Heaven or Haven according to Dr. Marvin Miracle. I wasn't sure of the correct pronunciation. I just knew I didn't want to go to Hell.

With tears streaming down his face, Dr. Marvin Miracle laid his special hands upon my head. I felt that I had been blessed. I felt that I belonged in this place. I finally felt at peace.

Dr. Marvin Miracle asked me to get on my knees in prayer. Although I knew I was going to have trouble getting back up with that bum knee I got in the state volleyball tournament, I followed his request. His special hands were still on my head as he lifted his voice to Haven.

"If you want to go to Haven, you must submit," he shouted.

"You must submit! A woman should learn in quietness and full submission," he yelled.

I knew I needed help to get up from my kneeling position with my bum knee, but there wasn't time to think of a graceful exit. I reached up and grabbed Dr. Marvin Miracle's necktie and yanked really hard. It worked. I stood up like a cripple who had been cured. I was up and out of there in no time. I grabbed a  fist full of bottled water on the way out of the door and didn't even bother to put any money in the offering plate.

I took a big swig of Holier Than Thou and decided that I would just take my chances with Cooter.

Email ThisBlogThis!Share to TwitterShare to FacebookShare to Pinterest
Labels: Cooter and Cheesy Mike and gang, Day 6 of 30-2 Days of Writing, Dr. Marvin Miracle, Holier Than Thou Spring Water, Nicky and Mike, repent, We Work for Cheese