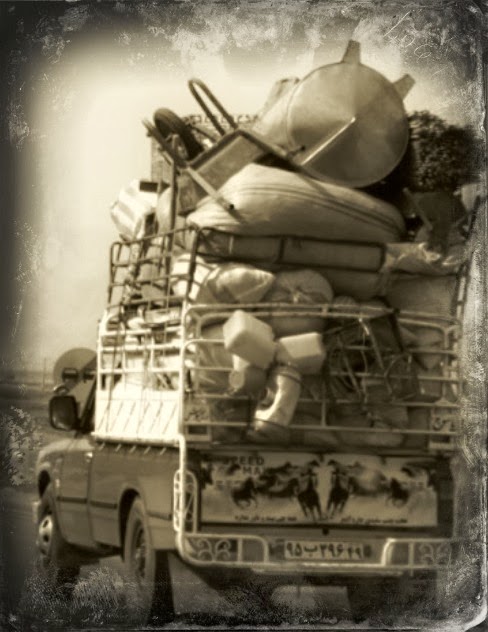 
Cooter and the gang are getting awfully nervous that 30-2 Days of Writing is almost over for another year. They really don't want to be shut up in my head again. I feel their pain.

If you are just now joining us at 30-2 Days of Writing, glad you are here. You can buy the next round. If you have a couple of hours with nothing to do, feel free to start at the beginning of Cooter's story and follow it through to the end. Then hop over to We Work For Cheese and read the works of my  much more talented friends.


Jorge was late for work the next morning, but when he arrived, he arrived in style. He had loaded the back of his pickup truck with all of his belongings from the tiny house he rented on a monthly basis. Gouda sat close to Jorge in the truck with the twin's car seats squeezed in the crowded front seat.  When they arrived at the Whiting Estate, Jorge changed his route. Instead of driving to the back of the house, he drove right through the manicured front lawn and backed the pickup truck up to the front door. Jorge and Gouda were getting the car seats out of the truck when Vera flung the door open.

"Jorge, what the hell do you think  you are doing?"

"Good to see you this morning, Ms. Whiting. I decided to take you up on your invitation to move my family into your guest wing."

Vera was quick to answer.

"What invitation? Have you lost your mind, Jorge?"

Jorge knew he was in charge. He laughed.

"Don't be teasing me, Ms. Whiting. You will scare my lovely bride to be."  Jorge held out his hand for Gouda to join him by his side.

Vera's mind was still foggy from the night before. She leaned against the door frame trying to collect her composure.

Gouda was concerned about Vera's appearance. She appeared weak and had suddenly gone pale.  When she saw Vera lean against the door, Gouda did not hesitate to go to her rescue. She hugged Vera lovingly and gingerly patted her back as though she were consoling an upset child.

"Oh, Ms. Whiting. You are the sweetest woman. I think God must have sent you from Heaven to be my guardian angel. My life was in the pits and then within a day, I met my future husband and  you offer us a home. How can I ever repay you, Ms. Whiting?"

Vera didn't know what to do. Since the day her mother had ruined her life, she had never been in a situation where she hadn't been in complete control. Now with her actions from last night, she appeared to be losing control of her own world. Vera began to sob.

"Bless your heart, Ms. Whiting. You don't have to cry. Were you afraid that we wouldn't take you up on your invitation? We are here, Ms. Whiting. We are here to stay. You just go on and shed those tears of joy."

Normally, Vera didn't care too much for the human touch. Except from Buck. But she found herself strangely comforted by this innocent young lady.

Gouda kept her arm around Vera's shoulder as she inched her inside the house.

"Why don't we go in and sit down, Ms.Whiting? Jorge can get the babies and  unpack while we get to know each other a little better."

Gouda led Vera into the well appointed family room. She helped Vera sit on one of the overstuffed cowhide chairs while she positioned herself on the matching couch. Jorge placed Velveeta in Gouda's arms and handed Nacho to Vera.

Vera snapped out of her fog at the shock of being addressed in such a disrespectful way.

"What did you call me, Jorge?"

"I called you Vera just like you made me promise to do yesterday."

"Oh, sure you do, Vera. We had just finished having that conversation about how social media could spread gossip faster than a party line when you suggested that I should start calling you by your first name."

She wanted to jump out of that chair and throttle him, but she had the baby in her arms.  Jorge grinned and decided it would be fun to push all her buttons. He turned to Gouda.

"Mi corazon, I forget  to tell you that Vera has offered to let us have our wedding in her beautiful gardens."

Vera had endured enough. She tried handing the baby back to Jorge, but he ignored her.

"I can't stop, Vera. I am too  excited." He turned his attention to his future bride. "Gouda, I saved the best for last. Vera is paying for the entire wedding!"

Gouda jumped up with the baby still in her arms. She ran to Vera, sat on the arm of the chair and embraced Vera.

"Bless your heart, Ms. Whiting. I can never thank you enough. You truly are an angel."

Vera was seething until Gouda took her in her arms. Her voice was so warm and soothing and she seemed so genuine. Before she knew it, Vera was calm.

Jorge went about his task of unpacking their belongings while Gouda began nursing Velveeta. Vera found herself smiling as Nacho lay in her arms reaching for the shiny diamond necklace which dangled  from her neck. The house was quiet except for the cooing sounds made by the nursing baby and the tune that Jorge was whistling as he passed through the room.  When Gouda had finished nursing the infant girl, she took Nacho from Vera and handed her the content baby girl.

Motherly instincts, which Vera didn't even know she had, took over with Velveeta in her arms. She began to rock back and forth in a chair that wasn't even a rocker. She began softly humming as the baby was falling asleep in her arms. She found herself recalling those days long ago when she could feel the movement inside her own belly. If only the nun hadn't seen the baby bump. If only she had been given a choice in the matter. If only Buck had known so he could come to her rescue. If only.

Gouda laid her sleeping baby boy on the couch and reached out to Vera to take the baby girl. Vera shook her head from side to side.

"No. Let me keep her just a few more minutes, please."

Brother Bob had no idea where he was. He was naked and lost. He didn't remember much about the day before except that he had killed Vera with too much sex. In retrospect, he remembered her yelling out "Jesus!", but he thought she was screaming with pleasure and not actually seeing Jesus come to fetch her. Now, he was alone in the wilderness much like Jesus himself.

Jorge had insisted on taking him home, but Brother Bob could not face his wife in his condition. First of all, he had left Vera's house in such a hurry that he had forgotten to put his clothes back on.  Second, he knew he had to sober up and wash the smell of sex from his body. So Brother Bob had convinced Jorge to drop him off in the country by the Brazos River.  After being dropped off, Brother Bob jumped in the muddy waters of the Brazos and washed his soul clean. With no way to dry himself off, he lay down on the muddy banks to dry in the sun. Unfortunately, he was so tired from his ordeal the night before, he fell fast asleep in the blazing sun. When he awoke hours later, the mud from the river was baked on his painfully sunburned skin. Brother Bob was a mess both physically and spiritually.

With the trauma of sex, death, booze, guilt, shame, sunburn, no food and an impatiently waiting wife, Brother Bob wandered among the prairie grasses and Mesquite trees of the hot Texas countryside in a complete daze.  With his brain not functioning properly, he had no idea where he was or how he would get back home. His hunger and the pain from his burning skin had taken over his thought processes. He knew he was lost, but he had totally forgotten that he was naked.

Brother Bob had curled up in a ball in a small patch of shade under a scraggly Mesquite tree, when he thought he heard a vehicle. He jumped up and started running toward the sound. Scared of missing the vehicle, he carelessly ran through a patch of prickly pear cactus. With blood running down his legs, mud caked on his body and skin as red as a beet, he kept running until he saw the dirt road. He jumped out on the road with his arms flailing.

The crowded school bus came to a screeching halt just feet from Brother Bob standing naked in the road with his hands in the air.

Email ThisBlogThis!Share to TwitterShare to FacebookShare to Pinterest
Labels: 30-2 Days of Writing, naked and lost, social media, the incident on the road is bound to make the national news