Pass Me a Deviled Egg and Cold Lone Star 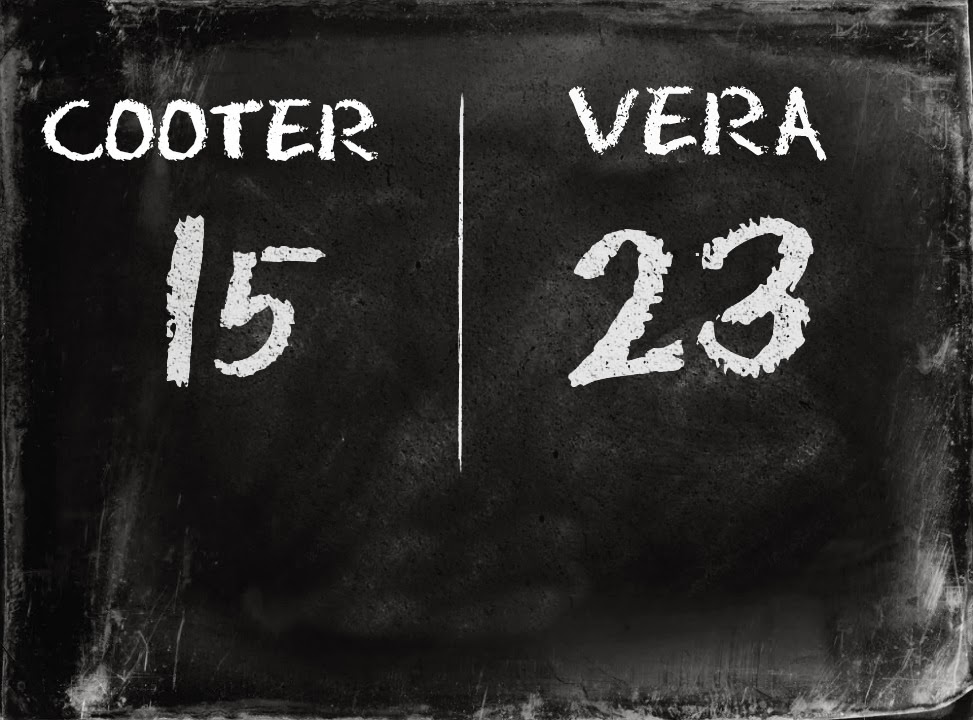 
Happy Valentine's Day to everyone. I will always remember the high school student who made a wooden plaque for me in woodshop class. He saved a bit of wood by abbreviating  the words, Valentine's Day. He proudly brought me the plaque to hang on the wall of my classroom. I tried to keep a straight face as I held it up and shared it with the rest of the class.  The plaque simply said, HAPPY VD.

He wasn't the sharpest knife in the drawer.

Speaking of sharp knives, keep them away from the participants of 30-2 Days of Writing. We are all getting a bit desperate these days. We are not to be trusted. Don't believe me? Just go to We Work For Cheese and check out the stories of the other happy campers.


The mayor elections were held in the City Hall which was located in the old, original Whiting National Bank building. When Cooter went in to vote, he had to grin at the irony of the word Whiting chiseled into the granite door surround. He felt it was an omen as to how this election would turn out. His opponent was a pillar in the community. It was her town. It was her building. It was her election.

People filed into City Hall all day to mark their paper ballots with pencils stamped with the words Courtesy of Whiting National Bank, Your Hometown Choice. The voter turnout was larger than expected. The townspeople patiently waited in line for their turn to to enter the curtained cubicle. The voters were unusually quiet with no chit chat to promote their candidate of choice.  The only excitement of the day was when Vera Whiting made her entry into City Hall. Jorge had driven her to the polling place in her freshly washed Cadillac. When he parked in front of City Hall, he quickly jumped out of the car to open the door for Vera. After helping her from the car, Jorge began to walk into the building with her when she suddenly stopped.

"Where are you going, Jorge?"

Vera looked at Jorge as though he had slapped her.

"You most certainly are not going to vote right now. You are on the clock, Jorge. Vote on your own time."

Jorge returned to the car while Vera stopped to admire the beauty of her name scrawled across the doorway.

When she entered City Hall, she walked right past the people waiting in line and walked to the front of the line. She considered it her right. She never waited in line for anything. She paid people to do that. After she had voted, she exited the building with little regal waves to the people still waiting to vote and made her way to the exit where Jorge was holding the glass door open for her.

When the polling place closed, the doors to City Hall were locked and a big chalkboard was rolled into the front window. As ballot boxes were emptied and votes were counted, Sadie Sprinkle would hobble over to the chalkboard and post updated election numbers. Sadie was 83 years old and hadn't missed working an election since she buried her husband fifty years ago. Sadie could barely walk, but that didn't stop her from puttering back and forth from the ballot boxes to the chalk scoreboard. Sadie could hardly see and she wore the same pair of coke bottle glasses that she bought in 1957.  She was hard of hearing and wore a hearing aide that squealed at the most inopportune times. Sadie had long ago lost what sense of humor she may have had. She was tired and cranky and often mumbled and cursed as she walked. Sadie had long ago declared herself the electoral committee queen and nobody would dare try to take that Whiting National Bank pencil from atop her ear. She took election day seriously and there was no room for mistakes around Sadie Sprinkle.

Most of Cooter's supporters were already gathering at The Rack 'n Roll Pool Hall. Buck was busy icing down Lone Star longnecks while Ethyl was in charge of arranging the food on the pool tables which had carefully been covered with blue tarps. The local bar-b-que champs, Tate and Bobber, had set up their pits outside and the smell of brisket cooking on an open fire was filling the pool hall. Ethyl was tickled to see a whole group of women from the FBC prayer circle bring in plates of deviled eggs and bowls of lime green jello salad. Cooter was greeting people at the door and shaking hands. A lot of those hands belonged to people who had never been in The Rack 'n Roll Pool Hall.

Bobby Lee had volunteered to be the runner between the City Hall and the pool hall. He had stationed himself in a lawn chair outside the big window so he could watch  as the vote tally was posted on the chalkboard. When a new vote total was posted, Bobby Lee would run to the pool hall and announce the standings.

Then he would run back to the City Hall before Brother Bob took over his lawn chair. Brother Bob was there in the official capacity as Vera Whiting's runner. Vera sat in her Cadillac and ordered Jorge to turn the air-conditioner up or down or change the direction of the vent or change the radio station. She never seemed to be happy if she wasn't barking orders. From time to time, Brother Bob would knock on the car window and Vera would instruct Jorge to lower the window. Brother Bob would announce the standings in a very reverent voice.

Then without response to her adoring pastor, Vera would instruct Jorge to raise her window.

"Roll up the window, Jorge. There is enough hot air out there without that idiot, Brother Bob, breathing into the car."

Brother Bob was watching Sadie slowly erase the totals one number at a time. He was really getting annoyed at the jovial festivities over at the pool hall. He had even seen one of his deacons walking in that direction. He watched Sadie slowly scrawl the words FINAL SCORES. Sadie saw him with his face pushed up against the window. She didn't like him. Never had. Never would. She tormented him by writing each number slowly. He was fogging up the window with his heavy breathing. She wanted to walk over and and thump the window glass. As she finished with her writing, Brother Bob started jumping up and down and hollering. He knocked on the window and pointed at the chalkboard. Sadie couldn't take it anymore.

"Don't mess with me, you smart ass punk preacher!"

Brother Bob ran to the car and started banging on the car window with his fists.  Vera rolled her eyes and instructed Jorge to roll down her window.

"What in hell are you talking about, Bob?" She was not amused by his antics.

"The score! It has to be the aliens! Didn't you see that big group of Mexicans walk in to vote at the last minute?" Brother Bob was indignant.

"Are you talking about illegal aliens, Bob? You are such an ignorant dufus!"

Jorge could no longer hold his tongue. "Brother Bob, those men are not illegal aliens. They have lived in this town longer than you have. And they are not Mexicans. They were born right here. They are Texans."

"Roll the window up, Jorge, and take me home. Drive by The Rack 'n Roll Pool Hall on the way. There is someone there I need to see."


It took Sadie a good ten minutes to find the chalk and figure out the numbers scribbled on the paper in her hands.
Posted by Malisa at 6:10 PM

Email ThisBlogThis!Share to TwitterShare to FacebookShare to Pinterest
Labels: 30 Minus 2 Days of Writing, don't mess with Sadie Sprinkle, election night surprises, it has to be aliens